No charges yet: PH settles for immigration alert on Chinese clinic operators 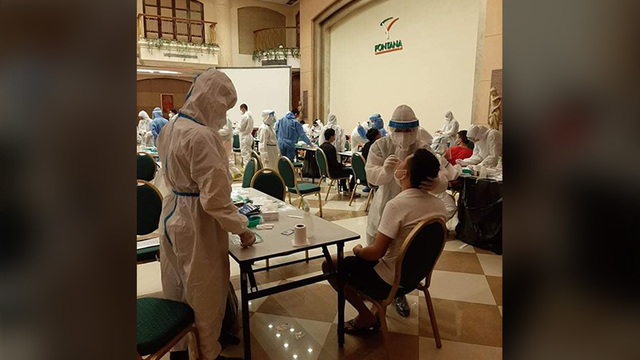 MANILA, Philippines – Unable to charge them yet, the Philippine government has settled for an immigration alert on the 2 Chinese operators behind the illegal coronavirus clinic in Pampanga, but this cannot stop them from leaving the country.

Bureau of Immigration (BI) Commissioner Jaime Morente said on Thursday, May 28, that the bureau had put Liu Wei and Hu Shiling on its alert list, adding that if they try to leave the country, “they will not be cleared for departure.”

Justice Secretary Menardo Guevarra later clarified to reporters that an ALO “does not function to actually stop travel.”

“But it alerts BI personnel to conduct tighter inspection on certain individuals, like suspected victims of human trafficking, persons on trial in criminal cases (who should produce court orders permitting them to travel), and the like,” said Guevarra.

Justice Undersecretary Markk Perete said that if the BI investigating units find out that there were prior charges against the Chinese citizens, it will be a basis to hold their departure.

Cops say there were 4 patients in the illicit infirmary

Liu and Hu were arrested on May 19 when police barged into the Fontana Resort in Casino in Clark and raided their underground clinic which was operating without proper registration and licenses.

They were released on the same day because of lack of a certification from the Food and Drug Administration (FDA) to establish that the medicines seized in the clinic were indeed illegal, the Philippine Daily Inquirer reported quoting the Criminal Investigation and Detection Group (CIDG)

“These two foreign nationals should have been brought to the inquest prosecutor instead of being released. If this is true, I will ask the National Bureau of Investigation (NBI) to step in and do its own investigation and instruct the BI (Bureau of Immigration) to look out for them,” Guevarra told reporters.

Morente said the BI is already conducting a separate investigation into the immigration status of the operators not only in Pampanga but also of another clinic recently discovered in Makati.

“Even if no criminal charges were filed against them, they can be charged for immigration law violations if we can establish that they violated the conditions of their stay in the country,” Morente said.

Morente added that if criminal charges are filed, deportation will only happen after the cases are resolved or after they have served their sentences in case of a conviction.

Guevarra said he has ordered both the NBI and BI to locate more underground clinics, and do case buildups against operators.

“Considering that they are not being supervised by the government, it is possible that the health of people who seek treatment in these illegal facilities is being compromised,” said Guevarra.

Meanwhile, the Chinese citizens who were working in Fontana and who were swabbed for coronavirus got their results much quicker than many overseas Filipino workers (OFWs) who have been stuck for months in quarantine hotels and cannot go home because of the delay in the clearances. – Rappler.com

Trump says will ‘temporarily suspend’ immigration due to coronavirus