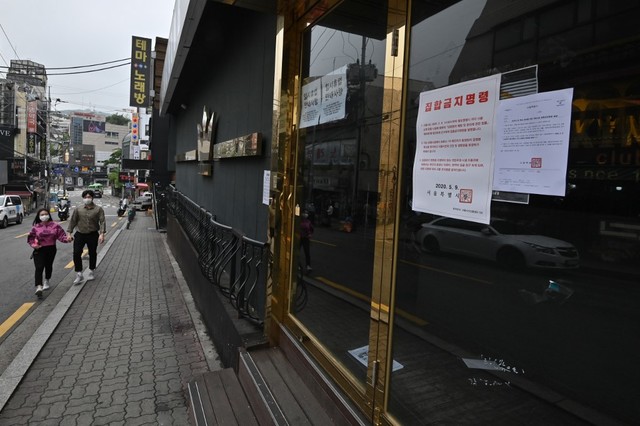 CLOSED. A couple wearing face masks walk past a nightclub, now closed following a visit by a coronavirus patient, in the popular nightlife district of Itaewon in Seoul, South Korea, on May 10, 2020. Photo by Jung Yeon-je/AFP

SEOUL, South Korea – South Korea’s economy is expected to suffer its first annual contraction since the 1990s as a result of the coronavirus, the central bank forecast on Thursday, May 28, as it cut interest rates to a record low.

The world’s 12th largest economy will shrink 0.2%, the Bank of Korea (BOK) predicted, a dramatic downgrade from the 2.1% growth it had forecast in February.

The BOK cut its key interest rate by 25 basis points to 0.5%, joining other central banks moving to try to stem the impact of the pandemic, which analysts say threatens to cause a global recession.

“The growth of the domestic economy has slowed significantly” due to the coronavirus, and is expected to be sluggish and unpredictable in future, the central bank said in a statement.

“The employment situation has deteriorated,” it added, with many in the service sector losing jobs, while “exports fell significantly.”

It is the second rate cut in 3 months, after a surprise 50-basis-point reduction to 0.75% in March.

The South is highly trade-dependent and saw its worst economic performance in more than a decade in the 1st quarter as the epidemic struck.

Gross domestic product shrank 1.4% year-on-year during the January to March period, its biggest decline since the 4th quarter of 2008 during the global financial crisis.

The International Monetary Fund (IMF) has forecast the world economy will contract 3% this year, saying it is expected to “experience its worst recession since the Great Depression” over the pandemic.

The IMF has predicted the South Korean economy will shrink 1.2% in 2020. – Rappler.com

If You Like to Play, this Game is a Must-HaveForge of Empires – Free Online Game

An outbreak at a warehouse of e-commerce firm Coupang in Bucheon, west of Seoul, has seen 69 cases, says the Korea Centers for Disease Control and Prevention.

RELAXED. Office workers walk along a street during the lunch period in central Seoul on May 22, 2020. Photo by Ed Jones/AFP

SEOUL, South Korea – South Korea reported its biggest spike in coronavirus cases in nearly two months on Thursday, May 28, as officials scramble to tackle fresh clusters that have raised concerns of a possible second wave of infections.

The country has been held up as a global model in how to curb the virus and has begun to ease restrictions, but is now rushing to contain new infections as life returns to normal. (READ: South Korea deploys mobile data, police to tackle nightlife cluster)

Officials announced 79 new cases Thursday – taking its total to 11,344 – with most fresh infections from the densely populated Seoul metropolitan area.

It was the largest increase since 81 cases were announced on April 5.

An outbreak at a warehouse of e-commerce firm Coupang in Bucheon, west of Seoul, has seen 69 cases, said the Korea Centers for Disease Control and Prevention.

Around 4,100 workers and visitors to the building were under self-isolation, with more than 80% tested so far, vice health minister Kim Gang-lip told reporters.

“We are expecting the number of new cases linked to the warehouse to continue rising until today as we wrap up related tests,” he added.

Social distancing rules have been relaxed in South Korea and facilities such as museums and churches have reopened. Some professional sports – including baseball and soccer – started new seasons earlier this month, albeit behind closed doors.

Students have been returning to classes since last week, although some schools were forced to turn away their pupils over concerns of new virus cases in their neighbourhood.

The country endured one of the worst early outbreaks of the disease outside mainland China, and while it never imposed a compulsory lockdown, strict social distancing had been widely observed since March.

But it appears to have brought its outbreak under control thanks to an extensive “trace, test, and treat” program. – Rappler.com

These stories made other people